Learn the ins and outs of  Khmer cuisine with Chef Mongkol Join one of our  cooking classes specially designed  for small to medium-sized groups. Our classes are available  in the morning (market tour included)  and  in the afternoon (market tour not included).

We set up cooking class at Changkran Khmer in a dedicated space in a traditional Khmer house  as another activity to our training restaurant.

During the morning  class, which happen daily, we will visit a local market nearby where  you will learn about the different ingredients (herbs, spices)  used in Cambodian food. Back at  the restaurant you will join your individual cooking station where we start preparing  together dishes of the day. Chef Mongkol will assist you every step of the way during the cooking class.

You will learn to cook one appetizer, one main course and one dessert. Finally at the end of the cooking class we will enjoy together the food  around a table.

Cooking classes should last between 2 and 3 hours from start to finish depending if the market tour is included or not. 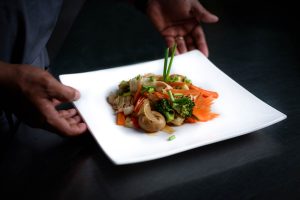 Learn how to cook Khmer food in Siem Reap, gateway to the famous Angkor Wat temple,  is one of the many activities you can do while being on holiday. Khmer cuisine was recently  described by Michelin-starred chef David Thompson as  Asia’s most underrated cuisine with its origin dating back from the Khmer empire. It is relatively unknown outside Cambodia and only few Cambodian restaurants are found abroad.

Khmer cuisine is often described as a less spicy version of Thai food but it is also quite  different in the way ingredients and herbs are used. Chilli are usually presented on the side of the dish instead of being added directly to the plate

We welcome solo travellers for our cooking class especially when joining  the morning session which is an great opportunity to visit a local market and learn bout local herbs, spices and vegetables.

Cooking classes are also a great activity for team building ad have a special space where we hosted in one of our group cooking class  almost almost 40 people.

A fun way to learn cooking and know better the people in your organization ! Visited this restaurant last night and the food was amazing! A little off the beaten track but well worth it. Staff very helpful and friendly and food delicious- so much so we went back today for a cookery lesson which was great fun and again the food was delicious. Highly recommended

My wife and I did the cooking class here. Everything was great, especially the warm and friendly staff, who kindly played the Sinn Sisamouth music I love for me during the class and explained what some of the songs were about. Delicious food and beautifully decorated restaurant

We were lucky to have booked our cooking class at the Changkran Khmer Restaurant.
From the the pickup at our hotel, the chef took us straight to the local market where we learned about local spices, vegetables, fruits and fish.
From there we went to the restaurant and enjoyed a lovely cooking class.
The setting is fabulous. While the restaurant is tucked away in between streets and buildings, the open air wooden Khmer longhouse is provding a great relaxed atmosphere.
With the Crispy Noodle With Makak Salad and the Traditional fish Amok they had choosen 2 great dishes to learn. Fresh ingredients and a great teacher lead to a fantastic result.
In short: a great location; great food; lovely people; a superb experience. Where are your cooking classes are taking place?

Our cooking classes are taking place on the ground of a traditional Khmer house situated on the riverside, about 5 minutes drive from Siem Reap city center.

How do get to the class?

Are your cooking classes suitable for vegetarians?

Yes they are . We have few Khmer dishes for vegetarians such as vegetable curry and lok lak mushrooms. Please be sure to let us know during your booking.

What happens if it rains?

What should I bring?

You do not need to bring anything in particular. You will be provided with an apron and a nice Chef hat:) Please wear comfortable clothes and footwear.

How do I paid for the class?

The payment for the class can be done by cash at the end of the class. We also accept payments by credit cards (Visa and Mastercard). We also process Alipay and Pipay mobile payments.

Kids are welcome to our cooking classes end usually enjoy this activity. We offer a discount of 50% for children under 12. Please let us know during your booking.